We were particularly thrilled for James who achieved a perfect score to become NC State Scholastic Champion in the kindergarten through grade 3 section, making the front page of the Holly Springs Sun!

This was all on the heels of our successes at the Wake County Chess Championship. The K-1 team, consisting of Aidan, Carter, Sydney, Oliver, Alex, and Landon, took home the second place team trophy. A particularly significant victory since half or our team had never played in a tournament before.

Our K-5 team, consisting of James, Kenan, and John, also took home the second place team trophy. Again this was especially impressive since, in team chess, the teams can be any size, and the top four playersâ€™ scores are tallied. Our K-5 team, with only three players, needed every single point they scored! 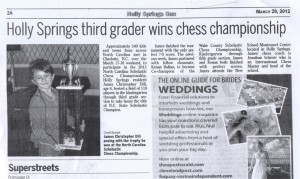 Article in the Holly Springs Sun describes the success of The New School Chess Team at the NC Scholastic Championship (click for full size image).

We owe a big thanks to Brad Dill for providing some of this content and for keeping track of our chess team’s tournaments and results. To access recent chess club news, please visit Brad’s chess club page in MemberHub.

Coach Jonathan Schroer is an International Chess Master who is very active in scholastic chess in schools throughout the Triangle area.

He believes chess is not just a game. The value of chess to help children develop strong cognitive and analytical skills has long been recognized. It has been known to help children in subjects ranging from math to music and is also a great way to learn good sportsmanship. (Read more about the benefits of chess.) These benefits provide many reasons why chess has long been emphasized not only as an after-school activity for our students, but as part of the curriculum here at The New School for children ages five and older. If you are interested in signing your child up for the chess club, please contact Jonathan.