The goal of Montessori is to empower students with the skills and confidence to meet their full potential. Core aspects of the Montessori philosophy such as student-centered classrooms, hands-on learning, differentiated curriculum, and providing students with authentic meaningful experiences, are strongly supported by contemporary research as essential components of an effective 21st century education.

Watch these videos to learn more about the fundamental concepts behind a Montessori education.

Delve a little deeper into the pedagogical models and philosophy behind the Montessori method by browsing through the brochures and handbooks below!

Unique Features of a Montessori Program

Parents exploring the Montessori method frequently want to learn more about the main differences between Montessori and traditional public schools. Here is a brief summary!

Who was Maria Montessori? 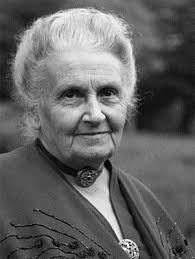 Dr. Maria Montessori was a lifelong educator, anthropologist, and pediatrician in Italy.

Montessori found from observation that children have sensitive periods between ages 3 to 6 years during which time they are primed to learn reading, writing, and arithmetic. Montessori emphasized learning through all five senses and developed hands-on, self-correcting materials. She refined her materials and methods and applied them to children of other cultures for over 50 years.

Montessori classrooms are different from traditional public schools and daycares in that children are placed in three-year age groups (3-6 years, 6-9 years, and 9-12 years).

Dr. Montessori found from her studies that older children act as peer examples and teachers for the younger children. Montessori classrooms have evolved to engage the child for learning. Instead of a teacher lecturing in front of the class, the Montessori educator demonstrates for the child the proper use of the classroom material and allows the child to learn at his or her most optimal pace thereafter.

Recent comparative studies have shown that children educated in the Montessori methods have a significantly deeper/longer-lasting base of knowledge, a heightened interest in their environment, and better abilities for investigation, thus preparing them for independent learning later in high school, college, and life.

Montessori Reading List
The years between birth and six are the most important developmental years in a child’s life. During these years, children in our program gain order, concentration, coordination, a good self-image, self-discipline, independence, and social awareness in a warm, loving environment prepared to meet their physical, social, and intellectual needs.

We have found that the children in our program benefit greatly from the collaborative efforts of the home environment. This consistency is important in reinforcing the concepts and methodologies presented at the school. In order to assist parents, we have provided a collection of suggested readings which will provide you with more detailed information on the Montessori philosophy.

By Dr. Maria Montessori:
Dr. Montessori’s Own Handbook
Spontaneous Activity in Education
Absorbent Mind
The Child in the Family
Discovery of the Child
Secret of Childhood
To Educate the Human Potential
The Montessori Method

By other authors:
How To Raise An Amazing Child the Montessori Way
Barron, Angela The Growth and Development of Mothers
Bettleheim, Bruno Dialogue with Mothers
Berends Whole Child, Whole Person
Dreikurs, Rudolf Children, The Challenge
Galinsky, Ellen Between Generations, The Six Stages of Parenting
Kaplan, Louise Oneness and Separateness: From Infant to Individual
Lillard, Paula Montessori, A Modern Approach
Malloy, Terry Montessori and Your Child, a Primer for Parents
Rambusch, Nancy Learning How to Learn